Explore Rome through the locations of Paolo Sorrentino’s acclaimed movie “La Grande Bellezza.” Discover with us legendary sites, such as the Villa del Priorato di Malta, the Parco degli Acquedotti, the baroque church of Sant’Agnese in Agone, and more.

After your arrival, a personal assistant will pick you up at the airplane gate. Private transfer to your luxury hotel in the heart of Rome. Welcome dinner in a top roof restaurant with a panoramic view of the city.

Today your personal guide will meet you at the hotel. You will start the tour at the Tiber River, which has played a central part in the legend of Rome since Romulus and Remus were rescued by a she-wolf on the river banks. Head to the Via Vittorio Veneto, one of the most expensive streets in Rome and a central location in “La Grande Bellezza.” Your next stop will be the public park of the Parco degli Acquedotti, part of the Appian Way Regional Park.

Continue to Aventine Hill to admire the Villa del Priorato di Malta, home of the Grand Priory of the Sovereign Military Order of Malta, and best known for a keyhole through which the dome of Saint Peter’s can be spied at the end of a garden framed by cypress trees.

This morning you will enjoy a guided tour including the visit of the 17th-centurychurch of Sant’Agnese in Agone, facing onto Piazza Navona, one of Rome’s most beautiful squares. Then, marvel at the Baths of Caracalla, dating from the rule of Emperor Caracalla, and In use until the 6th century when the complex was taken over by the Ostrogoths during the Gothic Wars. End your tour visiting the Colosseum.

Free time for your shopping in Via Condotti.

In the morning free time at your leisure.

In the afternoon enjoy a guided tour including: the Palazzo Spada, acquired by Cardinal Spada in 1632, who commissioned the Baroque architect Francesco Borromini to create a masterpiece of forced perspective optical illusion with an arcaded courtyard that gives the impression of being 37 meters long when it is in fact only 8 meters long.

Continue visiting the Church of San Pietro in Montorio on Janiculum Hill, with its courtyard Tempietto, considered a masterpiece of High Renaissance Italian architecture.

Today you will visit Giardino degli Aranci, Brancaccio palace, Capitoline Museums. The creation of the Capitoline Museums has been traced back to 1471, when Pope Sixtus IV donated a group of bronze statues of great symbolic value to the People of Rome. The collections are closely linked to the city of Rome, and most of the exhibits come from the city itself.

Start your walking tour visiting Villa Giulia. The pope Julius, a highly literate connoisseur of the arts, assigned the initial design of the building to Giacomo Barozzi da Vignolai 1551-1553. The nymphaeum and other garden structures, however, were designed by Bartolomeo Ammanati, all under the supervision of Giorgio Vasari. Michelangelo also worked there. Pope Julius took a direct interest in the villa’s design and decor and spent vast amounts of money on enhancing its beauties. Villa Giulia became one of the most delicate examples of Mannerist architecture. Continue visiting Barberini Palace, that houses the Galleria Nazionale d’Arte Antica, one of the most important painting collections in Italy. It includes Raphael’sportrait La fornarina, Caravaggio’sJudith Beheading Holofernesand a Hans Holbeinportrait of Henry VIII.

PAfter breakfast, private transfer from the hotel to the airport for your flight home. 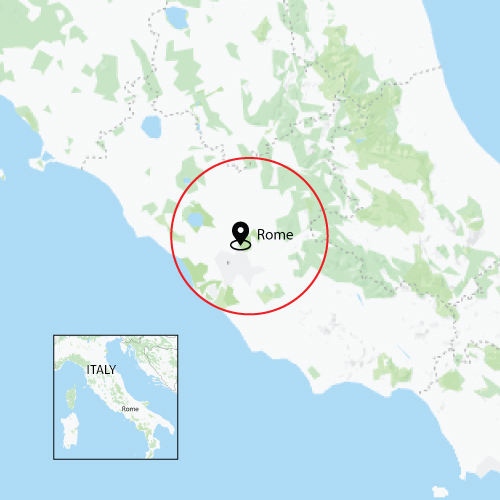