Italy may be the perfect place for you to study, it's very well known for its institutes of higher education. Many universities offer complete degree programs and selected courses in English and Italian courses for international students.

After your arrival at the airport, your private driver will lead you to your hotel located in the centre of the city. In the afternoon, you will discover the amazing city of Milan in a guided tour. Starting from the Duomo (cathedral), the Gallery Vittorio Emanuele II, the “La Scala” Opera-House. This is where operas by Puccini, Verdi, Ponchielli, Donizzetti, Bellini and Rossini premiered. Explore the fashion district of Milan, Quadrilatero della Moda and enjoy free time for your shopping. Stroll downVia Montenapoleone and Via della Spiga, the most elegant streets of the city, discover the best shops and boutiques, where authentic Made in Italy clothes and accessories by the most famous brands are produced.

Night in the Navigli area, really trendy and full of wine bars for those who want to try an authentic Milan “aperitivo” and live the authentic nightlife of the fashion’s capital.

Today, you will have the opportunity to visit the best university in Milan in a guided tour. You will know more about the programs of study and attend some conferences. Milan was ranked the 21st best city for students in 2012 on the QS ranking due to its large, diverse student population, cosmopolitan atmosphere and leading influence on the fashion industry. If sports are more your thing, Milan is home to two of the best football teams AC Milan and Internazionale. Milan was also rated highly in the Employer Activity category because a large number of employers seek out graduates from this leading city. You will visit the:

The state-run University of Milan offers a wide variety of programs for international students, including three programs entirely in English: economics, informatics, and medical school. They also offer “entry level” programs where students take their first 45 to 60 credits in English and then the remaining courses in Italian, however, the final thesis may be written in English. At the doctoral level, University of Milan offers 21 programs across multiple disciplines. Additionally, this school offers many extracurricular activities, including their own amateur sports association, orchestra, choir, theater and cultural activities.

Bocconi is a research university of international standing in business, economics, and law. Its research projects are funded by national and supranational institutions. By virtue of being a major node in the European and global network of business and economics universities, Bocconi exchanges faculty and cooperates on large projects with like-minded European and American universities and business schools. Bocconi has close relations with major corporations and international agencies, as well as their managers and officials, and constantly interacts with the business and economic environment to assess new issues, implement new techniques, and start new research endeavors. Università Bocconi has an Undergraduate School, a Graduate School, a School of Law and a PhD School. SDA Bocconi School of Management, founded in 1971, takes care of the post-experience management education.

Enjoy free time at your leisure in Milan to explore the city on your own.

Today you will have the opportunity to discover the top fashion school in Milan.

Italy has long been known as one of Europe’s main trendsetters, due to its history of political power in classical times as well as its cultural power in the Renaissance era. Cities such as Florence, Rome, Naples, Genoa and Venice have all been recognized as fashion centers but Milan, with its minimalist fashion houses of the 1980s, has developed into the country’s ‘fashion capital’ – and joins New York, Paris and London as an international fashion capital as well. You will visit the most important fashion school of this city:

The Istituto Marangoni is split across three campuses; its main campus is based in Milan and the other two are in London and Paris. The school, home to 2,000 students across all three campuses, offers courses in fashion design, fashion business, fashion buying, brand management and fashion promotion. The school, boasting the likes of Franco Moschino and Domenico Dolce as alumni, reports a 90% placement rate after graduation.

The Politecnico di Milano was established in 1863 and is the largest school of architecture, design and engineering in Italy, with almost 40,000 students enrolled. The school offers an undergraduate program in fashion design and a master’s program in ‘Design for the Fashion System’.

After breakfast, private transfer from Milan to Bologna. Check –in at your hotel. You will spend your time in this city to discover its university and the way of life of international students. Often overlooked, Bologna has a lot to offer international students. Bologna is a city that is still etched by the Renaissance with stunning towers and porticoes. Bologna considers itself Italy’s culinary capital and has the largest student population in Northern Italy. In the year 2000, Bologna was named the cultural capital of all of Europe. There’s plenty to see and do there.

Enjoy a guided tour to know more about the University in Bologna and the courses.

Enjoy free time at your leisure in the most fashion club of the city. Bologna possesses a ton of energy, a real palpable pulse that you can feel every night.

This morning, departure to Florence. Check –in at your hotel. Free time at your leisure to relax. In the afternoon, meet your private local guide at the hotel. Florence’s rich past as the cultural center of the Italian Renaissance can still be seen today in the wealth of art gathered here, and in the preservation of its splendid architecture. The tour includes visits of the Duomo and the Baptistry, the Piazza della Signoria, the Ponte Vecchio, the Uffizi Gallery.

Enjoy sunset with view on Ponte Santa Trinità with an aperitif at the Santa Trinità bar. Live the magical atmosphere of Piazza della Signoria at night.

Today, you will discover the wide range of University courses that Florence has to offer. Birthplace of the Renaissance and known for being one of the most beautiful cities in the world, the skyline of Florence is unmistakable. Located at the heart of Tuscany, students flock from all over the world to study cooking, art, history, and language in the city where Dante originated Italian, as we know it today. Florence is a top student destination, drawing in students with unique beauty and personality, multiple museums that hold iconic artwork and architecture.

With campuses in both Florence and Rome, the Accademia Italiana is a top fashion and design school with options for a three-year degree or short-term study options.

The University of Florence

The University of Florence was founded in 1321 and boasts former lecturers such as Renaissance author/poet Giovanni Boccaccio who was a professor of the Divine Comedy at the University. Today, they are known for their research endeavors across disciplines and are home to one of the oldest museums of natural history, which was founded in 1775 and is home to botanical gardens, dinosaur bones, and other fossils found in the Tuscan region. Enjoy your evenings by sitting out of one of the lovely bars and restaurants before hitting one of Florence’s luxurious clubs. If clubbing is not your scene, Florence offers a diversity of down to earth student bars and lounges that offer a diverse mix of locals and International students. Florence is also known for having ‘Aperitivo’where you can enjoy an early drink at local bars and indulge in a complimentary buffet of Italian cuisine.

This morning, your private driver will lead you to Pisa. Pisa is one of the top student cities in Italy; about half of the population is made up of students. Located at the mouth of the Arno River, Pisa is known for its palaces and bridges as well as dozens of historic churches. But there are plenty of fun nightlife venues as well to support the huge student population and multiple festivals throughout the year.

Of the 54,000 students at the University of Pisa, 1/4 come from outside the region, and many of them are international. You’ll be in good company here, noteworthy people like Galileo Galilei and former Pope

Clement XII call the University of Pisa their Alma Mater. The campus has a sports center and multiple libraries located around the city center. Minutes from the Tower of Pisa and an international airport, you’re in a good place to start your Italian adventure.

Transfer back to Florence. Enjoy Florence nightlife in the most chic bar of the city.

Rome is an excellent place for international students to study. It is one of the largest cities in Italy as well as the capital city. Home of the Vatican and, of course, the ancient Roman civilization, there is history and intrigue everywhere you turn.

Ranked in the top 200 universities in the world by the QS report,the University of Rome is more commonly known as La Sapienza. They were also one of the first universities to offer Master’s degree programs entirely in English. Exchange students enjoy a wide range of services such as guidance and tutoring info and reception free transportation, a help desk for people with disabilities, cafeterias, libraries, sporting facilities, cultural centers, technological facilities and more.

The University of Rome has relationships with more than 400 Erasmus schools throughout the world, so there are many international students. They have courses and entire programs completely in English. Additionally, language courses for non-native speakers, career services, student clubs, sports, and theater clubs are offered.

As an alternative to the traditional Italian system, check out John Cabot University, the only American University in Italy. Courses are completely in English and there are four year degrees as well as study abroad opportunities. The university is small–1,000 students from 55 countries and they offer everything an American university would from dorms and meal plans to clubs and organizations. With thirteen different degree programs, students have the opportunity to earn both an American BA and a UK BA degree. There are also numerous opportunities for language study as well as for international internships to facilitate travel across the world. Night in Rome. Live the students life in the most important club of the eternal city.

Enjoy nightlife in Rome with its wide collection of small and large bars and clubs. The bars feature various styles and genre of music like pop, funky, jazz, house, hip-hop and a lot more.

Today, you will make a visit to the principality of the Vatican City. The private air-con vehicle will take you to the entrance of the Vatican Museumand you start your walking tour with your private English speaking guide. You will explore the galleries of the Vatican Museums, home to the most celebrated art collection in Europe and see the incredible fresco in the Sistine Chapel. Then, continue on to St Peter Basilica, the largest church in the world. The tour ends in St. Peter’s Square. In the late afternoon, continue the tour to the Castel Sant’ Angelo and transfer to the hotel.

After breakfast, private transfer to the airport for your flight home. 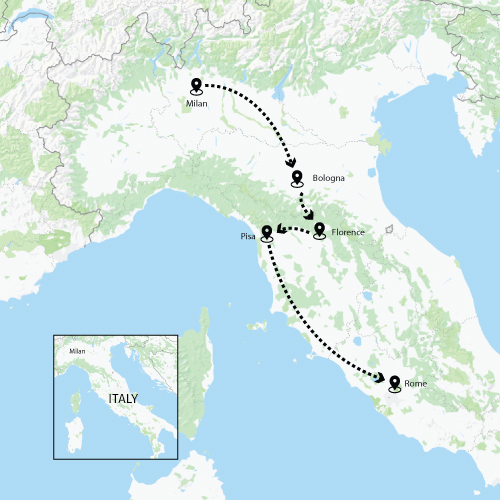